Slam poetry is a form of art that combines the elements of performance, poetry writing, competition and audience participation. It is typically on display at events called poetry slams, or simply “slams.” For the past six years, SCVi Charter School has sent a team of poets to the GetLit: Words Ignite Classic Slam each year.

This event has been a staple event in the Southern California slam community for 10 years. In addition to the events, GetLit has created Common Core-aligned weeklong mini units and one-day lesson plans available to educators across the globe. GetLit’s mission is to bring the power of poetry to classrooms in order to ignite a dialogue of literacy, passion and empowerment.

According to Coach Jodi Blinn, a 10th grade English facilitator at SCVi, this year’s team of four from SCVi have taken a brave and powerful stance by focusing entirely on social justice issues.

According to Blinn, poem topics include mental health and hate crimes.

“These four amazing young people have powerful voices, stories and perspectives,” Blinn said. “They write about very personal experiences, and it is incredibly moving.”

This year’s team is participating in the GetLit Words Ignite quarterfinals and semifinals on April 30, with the finals on May 1. Let’s meet the team: 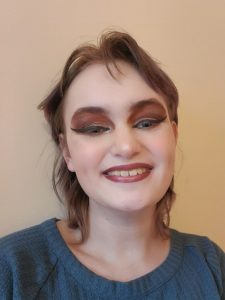 Adlof is the only sophomore on the team. Their featured individual work is about loss. Their group poem, “This Just In: The Queers Are Still Dying,” focuses on increasing awareness of hate crimes against LGBTQ+ people. Through participating in slam poetry and GetLit, Adlof said they have learned there are people who support them. “I learned how to process emotions,” Adlof said.

Adlof said that other learners should consider getting involved in GetLit because of the powerful community, both on the team and in GetLit as a whole. “It also can help you a lot with your feelings and emotions,” Adlof said. “The advice I have is to go easy on yourself and your art. Everyone has their own style and that’s OK.” 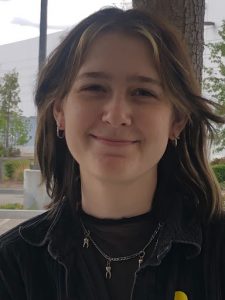 Hanna is one of two seniors on the team. Davis is performing her individual poem titled “Hunger,” which centers on personal experiences with an eating disorder and depression. She is also performing in a team performance of a poem she wrote titled “Letters I Write to Myself from Virtual Asylum,” which is about her journey to therapy.

Davis said she absolutely loves the community and the opportunity to connect with others and their shared experiences.

“I’ve learned how to grow as a person through slam poetry,” Davis said. “It has helped me realize that I will constantly endure change through my entire life and that this is a good thing.”

Davis recommends that other learners consider participating in slam poetry and GetLit. “Even if they used it purely as a coping mechanism, it has such a positive impact,” she said. “It is also a really powerful art form and processing tool for me that works better than most techniques I’ve tried.” 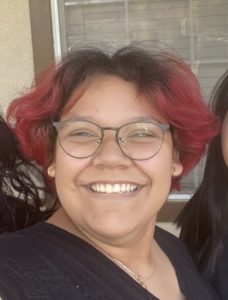 Gomez is the only junior on SCVi’s team. Her individual poem is about her queer experience and how she came to terms with her sexuality, and she performs in the aforementioned group poem about violence against the LGBTQ+ community.

Gomez said she loves the feeling of being on a team and that this experience has given her a sense of belonging. “I never did sports as a kid, so I never really got the sense of competition and winning, so this was my way of doing that through art,” Gomez said.

Gomez said that Get Lit has taught her to express herself and talk about her challenges, feelings and experiences. “My poetry became the vehicle for me to open up and talk to my family after my mother’s passing,” Gomez said. “I also realized that my poems informed me on how I view these experiences.”

Gomez said she struggled with her identity for a long time and now she can open up about that as well. “Poetry is also like therapy, with the bonus of building long-lasting relationships from it.” 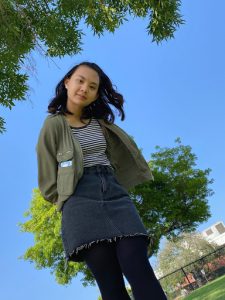 Wong is the other senior on SCVi’s team, and she is performing two individual poems. One poem, titled “Two Wongs Don’t Make a White,” is about the rise in hate crimes against Asian Americans, as well as her personal experience with racism. The second poem, “An Elegy to My Grandma: 12 Years Later,” is a personal poem about losing her grandmother when she was five years old. Wong said she talks about her struggles with connecting with her heritage and vision for her future. Finally, she also performs the aforementioned group poem about mental illness with teammate Hanna Davis.

After four years of participating in GetLit, Wong said that she has learned it’s valid to not feel well about things. She said since becoming involved in slam poetry, she has learned to proactively direct her feelings toward writing and performing.

“In the past two years, I’ve changed the poetry topics I write about and find that I enjoy performing and addressing global issues that many people in my community face,” Wong said. “Although I’m a shy person, I’ve learned to seize opportunities versus running away from the spotlight. Slam poetry has given me a voice and a purpose.”

Although the upcoming slam poetry event is competitive, Blinn said the greater focus is on the poets performing and having their voices heard.

“Every year, someone makes my cry,” Blinn said. “What they write about and then perform affects me and the audience. It’s powerful.”

Good luck to the SCVi Slam Poetry Team as they compete in the 10th Annual GetLit Classic Slam. The quarterfinals and semifinals are Friday, April 30, and the finals are Saturday, May 1.

Get the Latest from the Maker Team Sent to Your Inbox